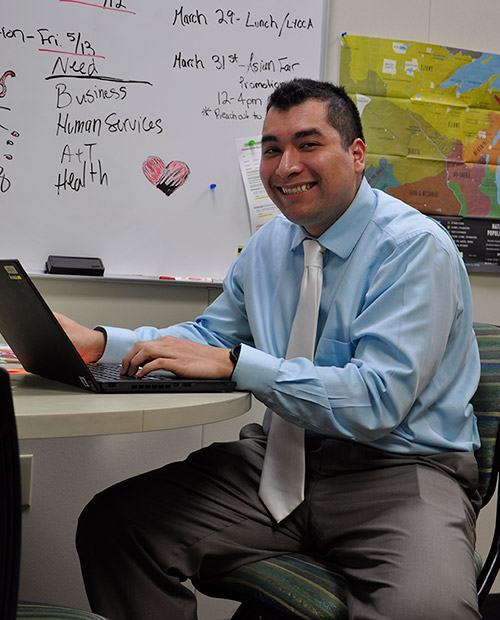 Madison College Student Life Advisor Rogelio Encizo is assisting with a new group at the college called the Interclub Diversity Council. The group’s long-term goal will be to create recommendations for serving the needs of under-represented groups.

Hate crimes. Assaults. Micro-aggression. Racist comments. Daily attacks on identities viewed as “other” are demanding attention from colleges and universities nationwide, and increasingly here in Madison, with viral hashtags such as #TheRealUW.

Colleges across the country are beginning to implement programs that promote equity, inclusion, and community engagement, including Madison College.

Recently, Madison College has made two strong moves in the direction of highlighting these pressing issues by the creation of the Interclub Diversity Council as well as hiring the new Vice President of Equity, Inclusion, and Community Engagement Lucia Nunez.

The Interclub Diversity Council or IDC, which Student Life Advisor Rogelio Encizo said stands for ‘I Do Care’, stemmed from a Students of Color Mentoring Program meeting on diversity dialogue.

The speaker facilitating the meeting asked the attending students what it meant to be a diverse student at Madison College, which “allowed the conversation to open fully,” said Encizo. “ It showed students that a lot of things are happening in this country, in our backyard and in our city, that might impact us as people, as human beings.”

The pressing question the students were asked was do these racial and economic inequities impact them and, as Encizo puts, “Do you want to do something about this?”

“A lot of our identity based clubs are experiencing very similar things, so it makes sense to get them all in a group, in a meeting together, to talk about what is going on at Madison college, but also how to better things that are out there,” Encizo explained.

“We know that micro-aggressions happen, we know that discrimination happens, that people might say very offensive, insulting things to one another and yet people won’t talk about it very much. But as a group, how can we slowly start changing the environment here?”

Encizo wants Madison College students to have “the most welcoming” experience here on campus. As for a long-term plan with the coalition of student organizations, Encizo hopes that the group will create recommendations serving the needs of underrepresented groups on campus.

“I want to create a positive environment, but the first step is to get people talking about it first. By getting everyone in a room, we can slowly start working towards what we want. At the end of the day, I want students to come up with ideas that I can support, help, guide, but I really want to hear what students are thinking,” he explained.

“I have thousands of ideas but if students don’t want that, it won’t have the impact that you want it to. Students will come up with awesome and great things… you just have to help them, guide them, and support them. It’s a work in progress, but we’ve got to start somewhere.”