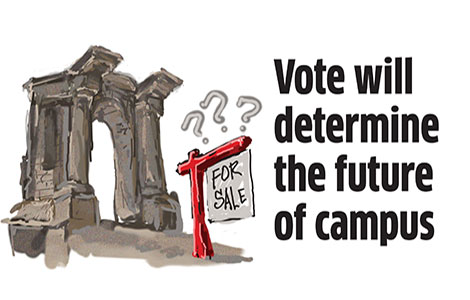 Vote will determine the future of campus.

The future of the Madison College metro campuses, West, South and Downtown, have been a hot topic of debate as of late. With future budget cuts expected and building maintenance under scrutiny, College President Dr. Jack E. Daniels III made recommendations for the buildings.

Before Daniels presented, there was a public comments session in which 23 of the scheduled 25 community members, students and staff spoke against the selling of the Downtown Campus.

The first recommendation stated that the college needs to make a commitment to the under-served area of South Madison by expanding services there.

“This area has the greatest unemployment, poverty and low educational attainment, coupled with transportation and access issues,” said Daniels.  “We have not had a comprehensive facility in South Madison inclusive of key student services and the ability to get credit bearing courses that could result in a degree or certificate.  Those services would include enrollment services, student success centers, counseling/advising and career services.”

The second recommendation was to end the lease at West campus when it runs out June 2016.  Daniels said that the lack of enrollment due to the Human and Protective Services program being moved to Truax as well as a current cost-prohibitive lease were factors.  A transition team was proposed to decide how to continue to serve the students of the west side and beltline area and help faculty and staff transition to other campuses.

In his third recommendation, Daniels asked that the board vote to sell the Downtown campus.  He said the fiscal reality of the needed repairs to the infrastructure as well as low enrollment due to the cosmetology program transitioning to Truax over the next two years supported the decision.

Many speakers during the public comments argued that the college needs the Downtown Campus to connect students with the University of Wisconsin-Madison.  In his presentation, Daniels said that during this school year, there have been a total of 14 students concurrently enrolled at the Downtown Campus and UW-Madison, down from 48 last year.

Daniels explained that many factors went into his final recommendation and that, if approved by the board, this would be only the beginning of a long transition process.

“Long term issues, and what an educational center’s environment should be equipped with for our future students – especially in the next 5-10-15 years – was a strong consideration as well as the capacity for us to renovate (the Downtown campus) to meet that need within a reasonable timeframe.  That renovation is prohibitive,” said Daniels.  “I agree wholeheartedly with (the Downtown campus) faculty and many throughout the college that we need to focus on the diversity of students and their need for basic and technical skill development – hence the recommendation for the commitment to South Madison.  I envision that this process is not a quick sale but more than likely a 2-3 year process.”

Many speakers at the District Board meeting questioned the original evaluation of the Downtown Campus building, saying that the companies used didn’t want to save the building.  In an email sent on April 13 to all faculty and staff, Daniels announced that the Vice President of Administration had selected the Concord Group to do another assessment and cost evaluation of the infrastructure repairs of the Downtown building.  The results of that assessment will be shared with the District Board before their May 13 meeting.

College Provost Terry Webb also published commentary on the issue in a letter that appeared online in Madison College Matters. Webb explained that the buildings used by the college must be able to help fulfill the mission statement of the school.

“The facilities must contribute to student access, success and completion to realize our accomplishments as a college,” said Webb.  “The focus needs to be on our mission first and our buildings and finances second.  Our mission revolves around teaching, learning and student engagement.”

Webb questioned whether or not the metro campuses are capable of providing those mission-based advantages to our students, staff and faculty.

He answered this by saying, “I have come to conclude that it is nearly impossible that any one of those three facilities is suitable to become a modern, engaging, flexible, innovative place to work and learn.”

The Metro Campus Task Force, which began meeting and evaluating the three metro campuses in late January, collected data like enrollment trends and the current conditions of the buildings to come to what they determined was the best option for the college.

At the April 8 College Assembly meeting, Daniels thanked both the task force and the Assembly for their work on the issue.  He told them he planned to present the three metro campus recommendations to the District Board later that day.

The District Board will vote on the recommendations on May 13.  A public comments session will be available at the meeting.  Students can direct their questions or concerns to the student representative for the District Board, Patty Hawkins, at [email protected]

To see the full outline of Daniels’s recommendations visit http://matters.madisoncollege.edu/articles/headlines/2015-04-10/6932/dr-daniels-shares-recommendations-for-metro-campuses.