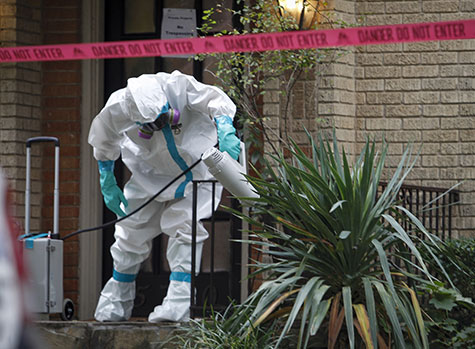 A worker with CG Environmental-Cleaning Guys sprays disinfectant outside the Marquita Street apartment building where a health care worker believed to be infected with Ebola lives on Oct. 12, in Dallas.

So many of us have heard of the epidemic taking the world by storm, known as Ebola.  But how much do we actually know about it?  Here are the facts.  Ebola Virus Disease (EVD), formerly known as Ebola Hemorrhagic Fever first appeared in 1976 in two separate outbreaks; one in Nzara, Sudan and another in Yambuku, Democratic Republic of Congo near the Ebola River, where it gets its name.

According to the World Health Organization (WHO), it is thought that fruit bats are natural hosts for EVD.  Humans contract EVD originally from infected animals such as chimpanzees, gorillas, fruit bats, monkeys, forest antelopes and porcupines after coming into contact with their blood, feces, organs or other bodily fluids.

From there, the virus is spread from human to human via the same bodily fluids.

The incubation period for EVD is 2 to 21 days, however, a person does not become contagious until they show symptoms.

The first symptoms of EVD include fever, fatigue, muscle pain, headache and sore throat.  From there, those infected can develop a rash, diarrhea, vomiting, impaired kidney or liver function and in some cases, internal or external bleeding.

Currently, there are no proven methods of treatment for EVD, but according to the Center for Disease Control (CDC), a drug called ZMapp is starting safety testing as a potential treatment drug.  There are also currently no FDA approved vaccines for EVD.  The National Institute of Allergy and Infectious Diseases is in the clinical trial phase of testing their potential vaccine.

The current outbreak of EVD in West Africa is the largest outbreak of this disease the world has ever seen.  On March 23, 2014 the WHO was first notified of the outbreak.  Subsequent studies have shown that the outbreak actually began in Dec. 2013.

On  Aug. 8, the WHO Director-General declared the outbreak a Public Health Emergency of International Concern.

Although this all may sound scary there is no reason to lock yourself inside your home. Ebola is not as contagious as we all may think.  In a recent article released by National Public Radio, the author, Michaeleen Doucleff, investigated the “R nought” of this outbreak.  The R nought is a term that calculates how many people can get infected from one sick person on average in an outbreak.

EVD has an R nought of around 1.5 to 2.  That means that for every infected person, they will, in turn, infect 1.5 to 2 people.  This may seem like a lot but compared to other infectious outbreak like measles, with an R nought of 18 or HIV, with a score of somewhere between 2 and 4, EVD is relatively safe.

This rationale may have been the reason behind Dr. Tom Frieden, the director of the CDC, saying, “I have no doubt that we will control this importation, or case, of Ebola so that it does not spread widely in this country.”

So although this is a serious outbreak and cause for international concern, the mayhem may be blown a little out of proportion.  The first step in solving any problem is learning the facts.