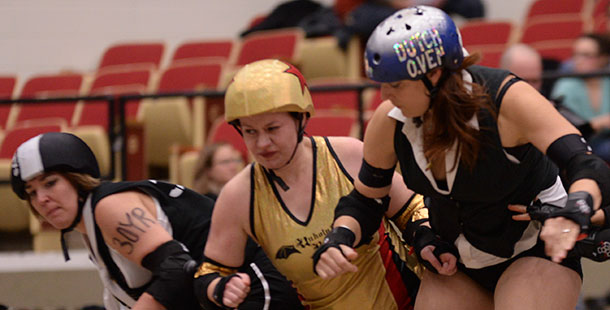 She laces up her black, quad skates over a pair of rainbow-striped socks. The name “Dutch Oven” appears in sparkly, silver letters on the side of her helmet. Strapped to her legs are two, black kneepads. She looks tough and intimidating in her roller derby gear.

On the outside she is a fierce competitor for the Reservoir Dolls, a Mad Rollin’ Dolls roller derby league team. She likes to play hard, she likes to win and most of all she likes competition.

On the inside she is Marissa Rosen, a mother of two and a chemistry instructor at Madison College. The transformation may come as a surprise to many of her students, but even in the rink her friendly, polite side comes out to play.

Rosen’s alter ego, Dutch Oven, trash talks while immersed in this physical sport. She admits though, her other persona is not always that different from her real self. “I have a problem with apologizing while I am playing,” she joked.

The Start
Rosen was an athletic child and swam competitively throughout high school. The only roller-skating she did in childhood was at birthday parties at the local roller rink. In college she rowed crew, which is something she took seriously and trained for year-round.

In 2005, while Rosen was in graduate school a friend invited her to watch a roller derby match, otherwise known as a bout. She was instantly smitten by the sport and craved the competition.

“This is for me. I was so sure right away,” Rosen said.

As sure as she was about roller derby, Rosen was also certain about her current profession. Rosen holds a doctorate of biological organic chemistry from the University of Wisconsin-Madison. As a graduate student she never thought she would enjoy teaching, but when she first became an instructor at Madison College, Rosen knew this is where she needed to be.

The Game
Chemistry may get a bad rap, but roller derby is also surrounded by misconceptions. One big misconception about the game is that it is not a real sport and that it’s staged like professional wrestling. In truth, roller derby is highly competitive, and requires great skill and athleticism. The game itself requires strategy, with complicated rules, in order to score points with players in the positions of jammer, blockers and a pivot.

Fellow Madison College chemistry instructor Amy Payne attended one of Rosen’s bouts. “It was a challenge and I found it really interesting to try to figure out what all the rules were. I had never gone to a roller derby game before,” she said.

Teammate Stacie Reece, aka Charlie Hustle, said Rosen is an asset to the team.

“I always look to her for feedback on skills, strategy and improvements as a skater,” Reece said. “And she’s a talented player, so she’s someone that challenges me on the track to continue to grow.”

Through her time with the Mad Rollin’ Dolls, Rosen has suffered her share of injuries, which she describes in a cheerful manner. She has experienced everything from bruises, sore muscles, tendonitis, scrapes, back injury, an iliotibial band (IT) injury, a partially torn posterior cruciate ligament (PCL) and a painful dislocated kneecap.

Despite injuries, Rosen enjoys the competition of the game and the adrenaline rush she experiences while playing. In addition, she likes being part of a team. “My team is really tight. You have a support system and a social group,” Rosen said.

The Life
As a chemistry instructor at Madison College, Rosen represents one aspect of the unique face of the Mad Rollin’ Dolls. She feels the league offers a good representation of the different types of people who live in Madison.

Women from all walks of life play on one of four home teams or one of the three traveling teams. Rosen points out how she has teammates who are career women, business owners and stay-at-home moms.

“When she first introduced herself at tryouts, she mentioned she was in the field of chemistry and received her PhD,” Reece said. “I thought that was really cool because it broke down any pre-conceived notions of who joins Mad Rollin’ Dolls to play roller derby.”

The sport attracts fans from an equal variety of local people. Rosen says roller derby offers something for everyone, whether it is the competition, the athleticism, the spectacle or the people watching.

Rosen’s enthusiasm for the sport is apparent and points out she could talk about it for days. Even on campus she wears her black, league jacket with pride. While she does not announce to her students that she is on a roller derby team, she says it is not something she hides.  “I feel so proud to say I am a member of Mad Rollin’ Dolls,” Rosen beamed with a smile.