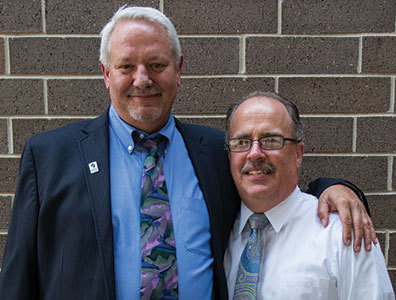 Three years ago, Madison College Provost Terry Webb discovered a new purpose for life, to continue living. His terminal diagnosis of kidney failure left a missing piece to a ticking internal jigsaw that needed to be solved.
“It was a slow process until the end. It went from being able to sustain me to within a period of four weeks being shut down,” Webb said.

He said the process was more annoying than painful.

“I did the type of dialysis that could be done at home, I wanted to continue working. Supposedly you sleep through it, but you don’t really sleep through it,” Webb said. “It is much better than the alternative. I certainly am grateful for the fact that it sustained my life during that time.”

While he was on dialysis, Webb’s nephrologist encouraged him to find a transplant donor. However, he had to qualify to receive a donation. The qualification process takes 6-8 weeks. In 2010, there was more than a five-year waiting list to receive an organ from a deceased individual, Webb said. Doctors informed Webb organ rejection was substantially less with a live donor.

People volunteered, including some of his friends, family and relatives to be considered as a possible live donor.

Among the people that were tested was Keith Cornille, Madison College vice president of Student Development and Webb’s coworker.  Doctors recommend organ recipients go with the most ideal match possible, no matter who it is. It turned out Cornille was a more compatible match than the others who were tested. Cornille and his family discussed with medical professionals whether or not to proceed. “They explained a great deal and I learned a lot and asked questions about my own children. Such as, if I give this up what if my children need something?”
Once the Cornille family was at ease with the procedure he proclaimed his commitment saying, “Lets do it! I was ready and had no apprehensions about it and to be honest, I never did.”

“The most amazing thing was how close our markers were.” Cornille said.

However, Cornille said it didn’t really matter if he was a family member, friend or just a respected colleague. Both of their offices are next to each other so Cornille said he saw impact on Webb and wanted to help.

“I would’ve done it for someone else as well. To me it has been amazing that people ask if it was a big deal or if it took a lot of soul searching. And no, it didn’t,” Cornille said. “He was a person in need; he was someone I worked with and a friend. I had the opportunity to try to help out so that is what I tried to do.”

On June 13, the transplant was performed at UW Hospital and the results are successful.

“Right now I feel 100 percent better than I did without a functioning kidney because now I have one that functions well. So in my life, it made a huge difference — more of a difference than I even thought,” Webb said.

In his role as vice president of student development, Cornille works with students to help guide them through their school tenure and works with many staff members as well.

With that friendship and throughout the experience, Cornille said that he just wanted Webb to have better health and have the opportunity to enjoy life and share love, laughter and smiles with his wife, daughters and granddaughter. He also said with the opportunities that did not pan out for him elsewhere, he believes he was meant to stay at Madison College to help Webb.

“I believe there is a reason for things,” Cornille said. “I can only believe one of the reasons was because I needed to be here to help Terry out and it’s all good.

Webb said he is grateful and it’s impossible to express the level of gratitude the situation deserves and doesn’t know if he would have done the same if he were presented the option of donating a kidney.

“I don’t know if I would have done the same, it’s hard to say unless you have to make the decision. I like to think I would have, but I don’t know,” Webb said.

Webb has to take health-sustaining medications the rest of his life and take special precautions to avoid infection.
Even with the precautionary measures, Webb remains positive and said that it is “a million times” better than being on a dialysis machine or worse.