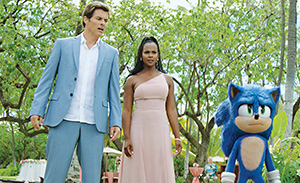 Back in 2020, many critics and Sonic fans had doubts about how the first movie was going to turn out, with the horrendous original design for the blue blur deterring many from the film. But luckily, their fears were misplaced. With a redesign and a pushed back release date, the first Sonic movie climbed the ranks to become the number one video game movie of all time.

Just months after the first movie’s release, a sequel was announced which made fans excited. On April 8, their excitement paid off. “Sonic 2” is a spectacular movie for all ages. With action packed adventure and stunning visuals, there is a little bit of everything.

The writing itself is phenomenal, from the lighthearted scenes to the action-packed moments, each scene is beautifully written and entertaining. Using the first film and pieces of Sonic lore, the film creates a universe that is not only believable to long-time Sonic fans, but its narrative is easy to follow and enjoyable for newcomers. The writers found a way to make the story coherent to anyone watching, no matter the age or knowledge of outside sources. By doing this, they have not only broadened the viewer base, but they have given themselves the freedom to do what they want with the characters and the story.

The dynamics between all the characters felt realistic and genuine; there was no point in the film where the characters did not feel authentic or out of place. Each character felt like they fit into the world that the writers had created. With a big name cast it is no wonder that they were able to make many scenes have an emotional impact on the audience.

Jim Carrey, James Marsden and Ben Schwartz reprise their roles for the film, bringing with them talent and charm. The chemistry between the actors was stunning; the way Carrey, Shwartz and Marsden played off each other made for an amazing experience on the big screen. Tika Sumpter and Natasha Rothwell both also return to the franchise, creating a comedic duo that the audience cannot help but laugh with.

Though, the weight of the scenes would not have that much of an impact if not for the phenomenal soundtrack. From the original pieces written for the movie to the other song choices, everything came together for a thematically beautiful track. Tom Holkenborg returns as the lead composer for the film, each piece giving the movie more character. The musical motifs present in the first movie return for “Sonic 2,” causing each scene to have a bigger emotional impact on the audience. Combined with the talents of the actors, it created an unremarkable experience.

Believe it or not but “Sonic 2” limited its use of CGI. From actually lifting Jim Carrey into the air to setting a controlled fire on the ground, the production team worked hard to make sure there were as many practical effects as possible before CGI was to be used. This is a huge contrast from other big studios; Marvel, for example, uses CGI for little and mundane things such as flowing hair or a pistol.

The use of practical effects versus using all CGI just shows how much love and care was put into this movie. It is clear that “Sonic 2” was made and worked on by people who were really passionate about the film. From the actors’ chemistry on and off set to the amazing set pieces used, everything about “Sonic 2” was done with love and passion, and it shows.

“Sonic 2” is a fun movie for all ages. Whether you are a long time Sonic fan or just someone looking for an enjoyable time, this sequel brings a little bit of something to the table for everyone. If you are looking for a fun time with your family or yourself, then “Sonic 2” is just for you. Stunning visuals mixed with wonderful acting and phenomenal storytelling, this film is everything fans wanted for a sequel and more.