‘Spider-Man: No Way Home’ wraps up an iconic legacy 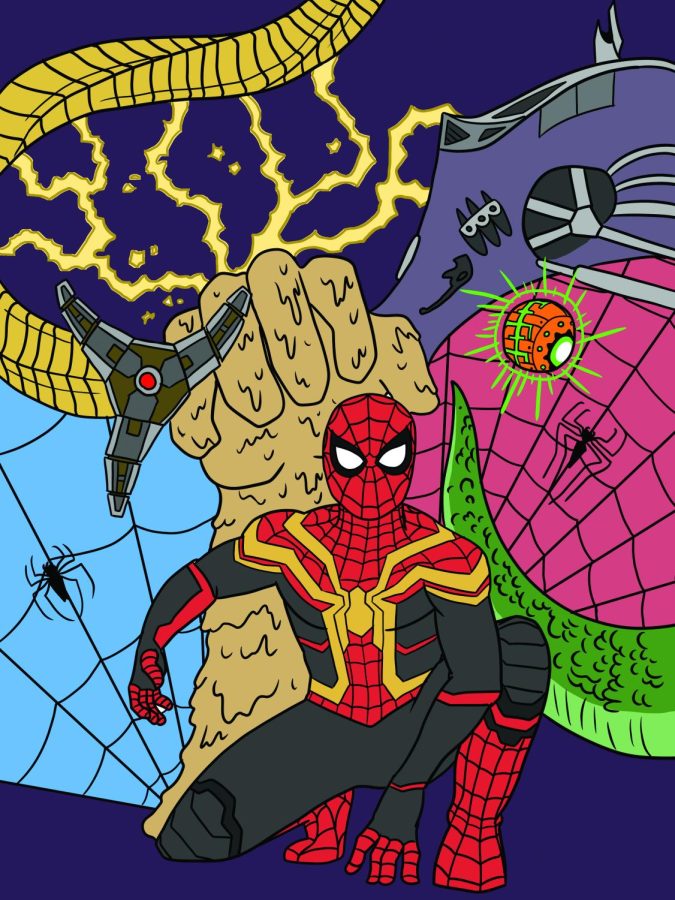 The conclusion of not only the Marvel Cinematic Universe trilogy, but also the eight live action Spider-Man films, “Spider-Man: No Way Home” is a bombastic conclusion to many of the webslinger’s iconic adventures. Starring in the movie is Tom Holland as Peter Parker, Zendaya as MJ Watson, Jacob Batalon as Ned Leeds and Benedict Cumberbatch as Dr. Stephen Strange. The film also has returning actors from previous Spider-Man franchises. Among these are Willem Dafoe as the Green Goblin, Alfred Molina as Doctor Octopus, Thomas Hayden Church as Sandman, Rhys Ifans as the Lizard, and Jamie Foxx as Electro. Everyone in this star-studded cast gets time to shine in this two-and-a-half-hour blockbuster.

Following the framing of Peter at the hands of Mysterio for the drone attack on London, New York is frantically questioning whether their friendly neighborhood hero can be trusted or if he is the menace J. Jonah Jameson claims he is. Peter and his close friends need to deal with his secret identity being outed and the type of danger that puts them all in. After botching a spell Dr. Strange cast to help Peter with his troubles, there is a tear in the multiverse. Suddenly, villains from the other Spider-universes are brought to the MCU. Chaos ensues as Peter must find a way to help them and send them home.

The story is filled with great character driven beats and phenomenally emotional performances, Marissa Tomei, Tom Holland and Willem Dafoe being standouts among them. Though the VFX dips from time to time, the film overall looks quite good, even if it is outclassed by the stunning visuals in “The Amazing Spider-Man 2.”

All the villains and other supporting characters get their own time to shine in both comedic and character growing scenes. Chief among these character driven scenes come toward the latter end of the movie when Peter is at his lowest point. That is best experienced watching the film for yourself, however.

The film has everything Spider-Man fans have been saying these past two Jon Watt’s movies have lacked. There are more consequences for Peter’s actions, his supporting cast has more to do, Peter isn’t coddled by other superheroes and, most of all, he shows his true understanding of what it means to be Spider-Man.

By the end of his journey, he truly understands that with great power, there must also come great responsibility.

This, however, will not be the last we see of this more mature and responsible Spidey as Tom Holland is signed on for three more MCU solo outings. So, get ready for more character driven narratives with plenty of action and drama as your friendly neighborhood Spider-Man swings into his next adventure!