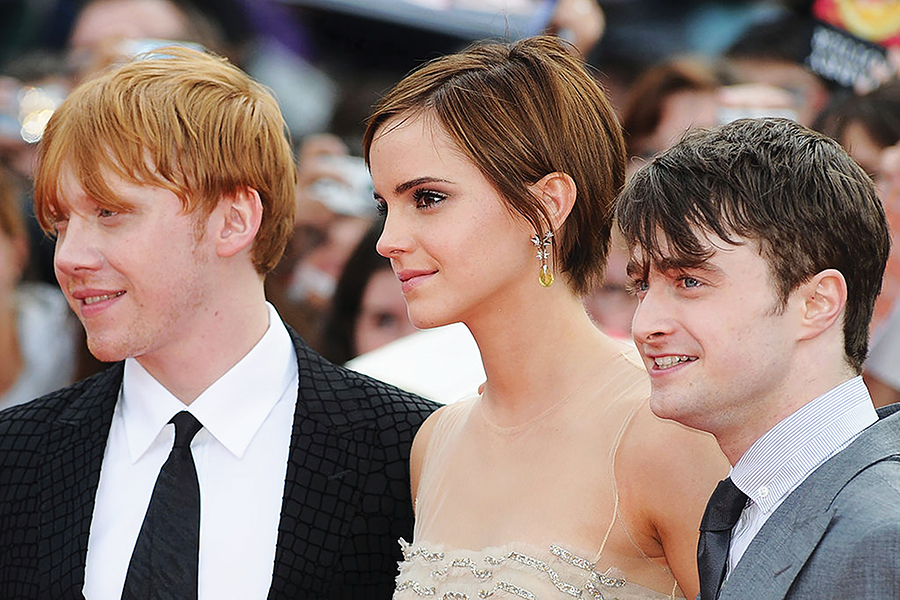 From left: Rupert Grint, Emma Watson and Daniel Radcliffe attend the world premiere of "Harry Potter and the Deathly Hallows: Part 2" at Trafalgar Square on July 7, 2011, in London.

The adventure all began when the first Harry Potter movie was released in theatres on Nov. 14, 2001. Every kid growing up in the early 2000s who instantly recognizes the instrumental theme song “Hedwig’s Theme,” composed by the legendary composer John Williams, are known as a Potterheads or followers of the Harry Potter series.

Let’s face it, as little kids, many of us used anything from twigs to hairbrushes or even our own hands to try and make those spells work. Spells like “Wingardium Leviosa,” otherwise known as the levitation spell, was one my favorites. I practiced and practiced, hoping someday I would get my letter to Hogwarts!

The Harry Potter series is full of fantasy, wizards, witches and spells. There are also mystical creatures like goblins, dragons, trolls, unicorns and even a Cerberus. Everyone has a favorite creature. Some like Norbert the Norwegian Ridgeback, a dragon  Hagrid raised in the first movie, while others like Aragog the Acromantula, the giant spider Hagrid raised since it was a baby. Or some like Buckbeak, a Hippogriff from the third movie. My personal favorite was Fluffy, the three headed Cerberus in the first Harry Potter movie. Hagrid purchased him off a Greek chap in a pub one day.

A generation watched as Harry Potter first got his letter, delivered personally by Hagrid from Hogwarts on Harry’s eleventh birthday. There were several attempts to deliver it prior, but none of them worked due to Harry’s less than pleasant Uncle Vernon and Aunt Petunia interfering with Harry receiving his mail. Finally, Harry took his first steps through Platform 9 ¾.

We watched as the Sorting Hat placed him into Gryffindor house, just like his parents. He made friends with Ron Weasley and Hermione Granger who were fellow first year students at Hogwarts in the Gryffindor house. They take their first classes at Hogwarts, make friends, make enemies and save everyone from a troll. They safely conquer Voldemort for the first time while Harry holds a certain precious object in his pocket after completing a series of difficult obstacles with Ron and Hermione.

Year two, “Harry Potter and The Chamber of Secrets,” opens with Harry meeting one of my favorite characters, Dobby the house-elf. He warns Harry not to return to Hogwarts. After being rescued by Ron, they return to Hogwarts and run into a bit of trouble with a Whomping Willow Tree.

Strange occurrences happen around Hogwarts, such as a teacher’s cat becoming petrified, dealing with Moaning Myrtle in the bathroom and Harry getting beat up by a bludger in a game of Quidditch. There is a rumor spreading quickly that the heir of Slytherin is none other than Draco Malfoy, which is later proven false. Harry finds a journal that belonged to Tom Riddle, the true heir to Slytherin. Harry uses the journal to fight the Basilisk, a giant serpent that kills people who dare look it directly in the eyes. The Basilisk is defeated and Harry is reunited with his friends.

Year three in “Harry Potter and the Prisoner of Azkaban,” Harry runs into some trouble when he makes a family member blow up like a balloon and fly away, even though he’s not supposed to do magic outside of Hogwarts. Harry learns that Sirius Black, a convicted inmate held in Azkaban, escaped!

Dementors protect Hogwarts, though Harry runs into a little trouble with them along the way. Hagrid becomes the new Care of Magical Creatures professor, and in his possession is Buckbeak, a hippogriff who unfortunately must be put down after a student irritates it to get it upset and attack.

Eventually, Harry and his friends use a time turner to repeat the night. They had to retrace their steps and solve a mystery without seeing their other selves. The true story of Sirius Black will be uncovered and will reveal more than Harry is ready to hear!

Year four, Harry and company return to Hogwarts for the school year. A Tri- Wizard Tournament is taking place, and students put their names in a raffle to be champions to compete. There was an age requirement of at least 17 years old but in an odd turn of events, the Goblet of Fire chose Harry to compete. He will have to deal with dragons, a maze of terror and sea creatures galore!

During the games came a ball at Hogwarts. Everyone can get dates but Harry and Ron. Hermione goes to the ball with Viktor Krum; Ron and Harry end up taking twins Padma and Parvati Patil. The Dark Lord is back and on a killing spree, and Voldemort is trying to kill Harry again; will he succeed?

In year five, “Harry Potter and The Order of the Phoenix,” anxiety is high as Harry realizes where loyalties lie. Few know the truth on what happened with “He-Who-Must-Not-Be-Named.” Dolores Umbridge takes over as Defense against the Dark Arts professor but is not exceedingly popular due to her very obscure ways of teaching. Harry raises a large group of students to rally against her to fight for what is right! “Dumbledore’s Army” will rise to the occasion and fight to learn spells to help them prepare for the real world; well, the magic world that is.

Year six, “Harry Potter and The Half Blood Prince,” emotions are high, and Hogwarts is not safe for students anymore. Dumbledore trains Harry to fight his battle with Voldemort (I know I said his name, sorry). Life just got a bit harder for Harry, now that the Dark Lord hid his own soul into seven different Horcruxes. But what are Horcruxes and where can you find them?

Love is in the air for Harry who has fallen in love with Ginny, Ron’s younger sister. Ron dated Lavender Brown for a while. Hermione seems to be falling for Ron, watching the friends struggle to save each other, their friends and school. Harry vowed after a certain accident that he would not be returning to Hogwarts so that he could finish what must be done.

Year seven takes place in “Harry Potter and The Deathly Hallows Part 1 and 2”. Harry, Ron and Hermoine are out on their own fighting to take down the Dark Lord all together. They must find the Horcruxes, all of them to help stop “You-Know-Who.” Watch as the ultimate battle takes place; whose team are you on? Who will succeed? Will Harry stop “He-Who-Shall-Not-Be-Named” in time or will evil win?

This cultural phenomenon is perfect for anyone who enjoys fantasy. For the past 20 years kids and adults of all ages have enjoyed these classic films and I predict this will not go away anytime soon. Get your robes and sorting hat and watch this beloved classic series, practice your spells and let your imagination do the rest.