‘House of Gucci’ is filled with drama 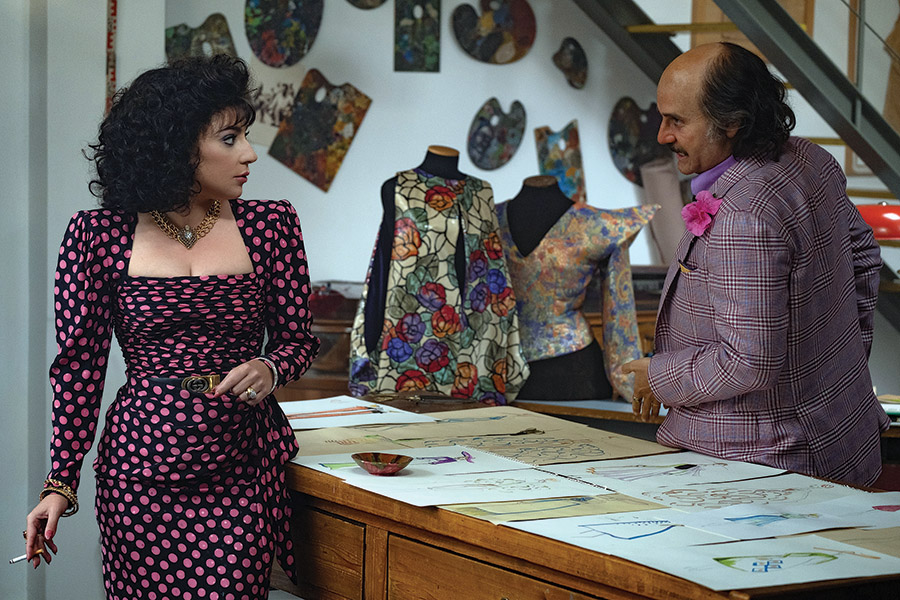 “House of Gucci” is a spectacularly intense and drama filled passion film that will be talked about for ages. Tragic events occur upon the House of Gucci including scandals, betrayals, greed and even murder, all packed into this 2021 drama. This movie is powerful and intense. It is full of emotions; one character craves power and success, but she carries a dark secret! Follow Patrizia as she marries into the Gucci family and step by step climbs her way into the Gucci empire.
Stefani Joanne Angelina Germanotta, otherwise known as Lady Gaga, steals the screen as Patrizia who charms the heart of young Maurizio Gucci, played by actor Adam Driver. This eventually leads to marriage, making Patrizia now one of the Gucci’s.
Some of the family was not so keen on this marriage. What were Patrizia’s intentions with the Gucci name? Patrizia tries to warm the hearts of many of the Gucci relatives including Uncle Aldo Gucci, played by legend Al Pacino. Uncle Aldo provides some comedy relief with puns and rather crude humor.
Next came Rodolfo Gucci, Maurizio’s father and partner to Aldo in co-ownership of Gucci. Rodolfo is played by British legend Jeremy Irons. Rodolfo did not warm up to Patrizia as the others did. He feared her intentions were not pure and tried to warn Maurizio. Maurizio did not listen to his father.
Over the course of the movie, internal family wars start to break out over Gucci. Patrizia gets a shot into seeing into the world of Gucci and it was like an addiction from there. Her whole life was Gucci, working and sharing ownership of Gucci with Maurizio and the two brothers, meeting with potential designers and of course, buying only the best money can buy! She became obsessed with greed and power and Maurizio feared there would be no stopping her.
Heartache falls over the film with the passing of a Gucci, but who will buy out his share of the company? A terrible betrayal occurs within the Gucci family leaving Patrizia and Maurizio the sole share owners of the House of Gucci.
As we all know, money and power can change people; this case is no different. Patrizia and Maurizio’s marriage was deeply affected but there is a catch; now there is a child in the mix of it all. How will things work out for them? Can their marriage be saved? Has greed pushed them too far apart?
A dark dread creeps over the last half hour of the movie. Pina Auriemma, Patrizia’s wing-woman, tells her fortune throughout the movie and knew a deed must be done. Pina, played by Salma Hayek, hires one of her best men to “take out the trash,” as stated in the film. What will happen to the House of Gucci? Who will continue to build its great legacy we all know and love today? What was the dark deed and who was it? What was their motive?
I can’t give away the ending, but what I can tell you is within the last ten minutes of the movie my mouth fell wide open. “House of Gucci” was as fashionable a movie as they come with a wonderful soundtrack. Director Scott Ridley really outdid himself with this film.
The cast played their parts perfectly, so believable and so dramatic! Lady Gaga was phenomenal in her role as Patrizia Reggiani, who started from a humble background and made her way into the Gucci empire and even married into it. Lady Gaga really felt all the emotions that Patrizia felt, her body language and reactions were flawless. She really became her character to a point where you believed she belonged there. I thoroughly enjoyed her performance.
Al Pacino steals every scene he is in with his sarcastic wit and charm. Jeremy Irons, always flawless in anything he is in, brought drama and thrill with his deep villainous voice and stern tone. You know he means business! Adam Driver is wonderful as the passive Maurizio as he watches his entire life and family fall apart before his eyes. His whole dynamic changes halfway through the movie which is unexpected and exciting to witness!
I will warn you there are some rather dark scenes and some graphic language. The movie was fantastic in my opinion. If you like movies that are based on a true story of a fashion empires rise and fall, involve fashion and have an intense mystery to them, this movie is Gucci, as people say, or in other words, this movie is the one for you.