The conclusion of the Spider-Man trilogy infected by Venom 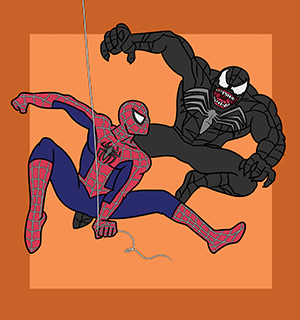 After the smash hit success of his incredible sequel, Sam Raimi had the biggest challenge of them all. He had to not only top “Spider-Man 2,” he had to cap off his trilogy with a bang. Pressure was immense not only from his own mind and the audience expectations, but also from Sony executives. Raimi had a vision. He had a powerful conclusion to his trilogy, nearly without flaw, but Sony had other plans.

Raimi’s vision would be tainted by one thing. One black, slimy, toothy thing. That horrible thing would be Venom. Raimi had no intention of putting Venom in the movie. Its inclusion required too much attention and knowledge of the character, neither of which Raimi had, nor could afford. He didn’t have much of a choice either way, however, so he went back to the drawing board.

Deep in “Spider-Man 3” there is heart. There is a soul of a good movie that shines through in certain scenes where the goopy black tendrils slink back to the edges of the screen. The reality is that “Spider-Man 3” is a good, possibly even great, movie. All the usual suspects return. Tobey Maguire, Kirsten Dunst and James Franco return as Peter Parker, Mary Jane Watson and Harry Osborn, respectively. JK Simmons and the entire Daily Bugle cast return as well.

However, the Bugle has a new employee among their ranks in the form of Eddie Brock, played by Topher Grace. Eddie is a scummy man and an even scummier villain in the form of Venom.

He isn’t the only one Spider-Man will have to face, though. Thomas Hayden Church plays Flint Marko, a.k.a. Sandman. These two foes, as well as a vengeful Harry Osborn are the external forces of villainy Peter must contend with in this tonally inconsistent outing. His worst opposition in this film, however, is himself.

No one is perfect. That is the clear message at the heart of “Spider-Man 3.” We all have our flaws to grow past and people in our lives to forgive for their flaws. It is part of human nature. Peter struggles with his ego, Mary Jane struggles with inferiority and Harry struggles to let go of resentment and forgive Peter for what happened to his father. This is a human story about three-dimensional people.

This inability to let go of hate is what consumes Eddie, and Sandman is burdened with the flaws of his past. It practically buries poor Flint unless he can be forgiven for one horrible act that changed his life.

Much like its characters, the film itself is flawed. Peter oscillates between being a good yet flawed man, to a complete narcissistic man-child thanks to the symbiote. It also makes characters like Mary Jane come off as too self-centered when that clearly wasn’t the intention.

Equally unintentional is the off-putting CGI sequences. Many of the “Spider-Man 3” fight sequences look rather out of place due to faulty compositing of certain objects or even just awkward green screen usage.

This really takes the viewer out of the experience for a moment and makes them ponder why “Spider-Man 2” looked so much better despite being three years older.

Overall, though, Sam Raimi did the best that he could with the messy black goop Sony gave him, and tried to recover a rather crammed cinematic experience.

Between three villains, a messy entanglement with an alien costume, a rushed redemption arc and sometimes incoherent tonal shifts, “Spider-Man 3” holds true to its core and shows us that despite our flaws, however deep, we have the capacity for good and for growth. We just need to hold on a moment longer, and believe in what we have within ourselves.

This wraps up the rather small web of Spider-Man reviews. Sandman, as well as the previous films’ Doc Ock and Green Goblin will be giving our webhead plenty of trouble in “Spider-Man No Way Home” on Dec. 17, so hopefully you’ve brushed up on their stories!