In search of the perfect pumpkin pie 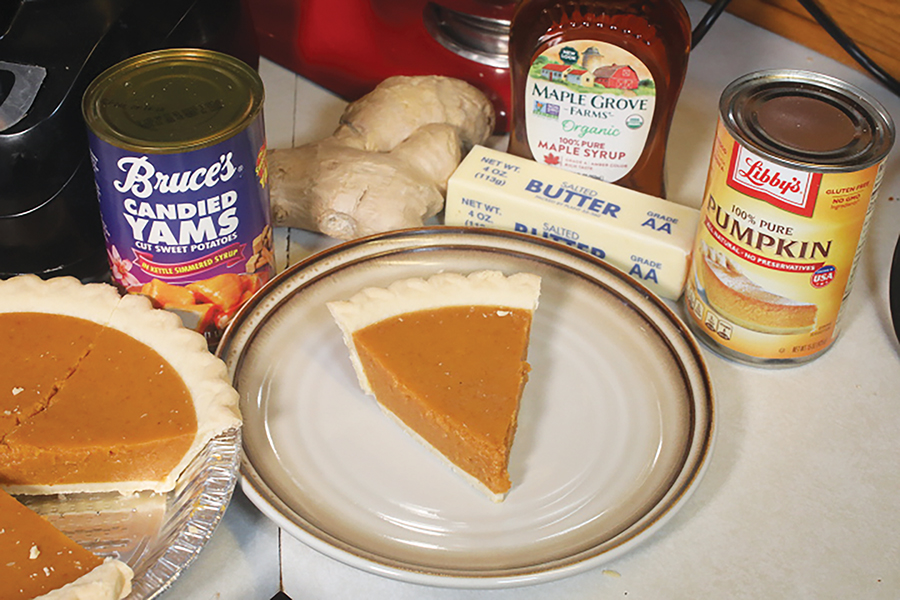 Slice of the finished pumpkin pie.

Pumpkin pie is the most delicious way to wrap up a Thanksgiving feast. And this year holds big promise as the world recovers from COVID – 19. Last year, during lockdown, my Thanksgiving consisted of Sloppy Joes made from ground turkey.

So, this year I want something special. I tried out a recipe from America’s Test Kitchen in search of the elusive perfect pumpkin pie.  What sets this recipe apart from other pumpkin pie recipes are its ingredients, such as maple syrup, candied yams and fresh ginger.

The first step is to make the pie crust. Put three-quarters of a cup of the flour, the sugar, and the salt in a food processor. Throw in the shortening and then take the chilled butter and grate it on top of the flour mixture That’s right, run the chilled stick of butter through a grater. The end result is butter shreds that will mix evenly into the pie crust dough.

Hit the pulse button on the food processor a few times until the mixture starts to come together. Add the remaining flour and pulse some more until you get a bunch of pellets of dough and there are no floury bits.

Take the dough pellets and combine them in a bowl using a spatula using the chilled water. Use as little water as possible. Only add water until the dough forms a ball and is no longer falling apart.

Wrap the dough tightly with cling wrap and refrigerate for at least 45 minutes but no more than two days.

Flour a surface to roll out the dough. A tip here is to lightly spray the surface with cooking spray and then sprinkle the flour. The spray will help keep the sprinkled flour in place.

Let the dough stand at room temperature for ten minutes. Just long enough to let it soften so you can take a rolling pin and roll the dough out into a 12-inch circle and about 1/8 inch thick.

This can be tough to do. If you’re not into rolling the dough out on a floured surface, another tip is to use Mrs. Anderson’s Baking Harold Import Co Crust Maker Bag, 11, Clear which goes for $16.77 on Amazon.com. It’s a flat round bag that you put the dough in and then zips shut.

Then just take a rolling pin and roll the dough until it reaches the edges of the bag and makes a perfect 11-inch circle. The bag unzips completely and then carefully let the dough fall into a 9-inch pie plate. Let the dough rest in the refrigerator for thirty minutes.

Par bake the pie crust. This means bake the pie crust a little first before putting in the pie filling. There’s going to be a lot of steam that comes out of the crust as in bake which can lead to bubbles forming and leaving your crust hopelessly deformed.

Employ two tips. One, take a fork and poke the dough all over forming holes for the steam to escape. Second, use pastry beads. Webake 10mm Ceramic Pie Weights with Cotton Bags goes for about $12 on Amazon.com. Line the dough with parchment paper or aluminum foil and pour in the beads. This will add weight to prevent those dreaded bubble from forming.

Bake the crust in a preheated oven at 375 degrees for 15 minutes. Put on oven mitts and carefully grab the edges of the parchment paper or foil and take out the pastry beads. They’re going to be hot so be careful.

Bake the crust for about 15 minutes more. Checking on it every 5 minutes to make sure it doesn’t over cook. Take just quick peaks. Once the crust reaches the desired shade of brown, take out and let cool.

While all that’s going on, make the filling for the pie.

Heat a saucepan over medium heat on the stove top. Here’s where it gets weird. The pie filling is par cooked.

First add the cinnamon and nutmeg to the saucepan and let those spices bloom. You don’t want them to burn. When they  become fragrant, add the pumpkin puree, sugar, maple syrup and salt.

You need to add one cup of candied yams, not canned yams. There’s a difference: candied yams are chunks of sweet potatoes covered in caramelized brown sugar. This proved to be a hard ingredient to find. Eventually this was ordered online for about $8 for three cans. One cup is about three-fourths of a can. Smash the candied yams and then mix in saucepan.

You’re also going to need two teaspoons of fresh ginger. Take about half an inch of ginger root and use a spoon to peel it. Then grate it and mix into the saucepan.

Now get ready for some work. You need to mix this in the saucepan until it becomes a shiny ball. You’re doing this so all the sugars caramelize. It takes time and effort. Plan on mixing for 10 -15 minutes. Your arm is going to get super tired. If you have a friend who can help it might be a good idea to take turns mixing.

Remove the saucepan from heat and whisk in the milk and egg mixture until fully incorporated.

Strain the mixture through a fine mesh strainer. Push it through using a spatula or back of a ladle into a bowl. You’ll be left with some ginger fibers and unincorporated yams. Throw this stuff away. In the bowl is super creamy pie filling.

Pour the pie filling into the cooling pie crust and return the pie to the oven which is still at 375 degrees.

You’re going to want to cover the edges of the pie crust with foil to keep them from baking further. You can also use something called a pie shield, but foil will work just fine.

Bake for 10 minutes then reduce heat to 325 degrees. Continue to bake 25 – 45 minutes longer until the center of the pie reads 175 degrees with an instant read thermometer.

Now you just have to be patient. Remove the pie from the oven and let cool to room temperature: about 2 -3 hours. Serve with slightly sweetened whipped cream.

Unless you really enjoy cooking, don’t use this recipe. It was absolutely delicious however very expensive and very time consuming to make. Halfway through making this I was longing for the days when Thanksgiving was as simple as ground turkey Sloppy Joes.