Suburban Lawns should be a new wave classic 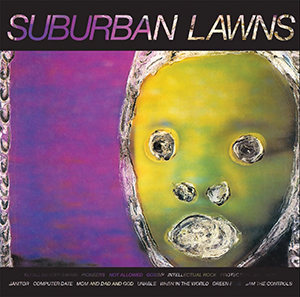 In the late ’70s and early ’80s, New Wave artists had all but redefined American pop music. Embodied by bands like Talking Heads, The Waitresses, The B-52s and Devo, the genre’s mix of classic punk and pop sensibilities made it a radio darling. Though their songs were often lyrically irreverent or nonsensical, each of these groups still had undeniable musical talent. There is a reason many are considered some of the greatest pop acts of the 20th century.

However, in that same New Wave boom dozens and dozens of excellent bands slipped through the cracks. Perhaps the worst outcome of this musical gold rush was the generations-long neglect of The Suburban Lawns, who ripped up the Southern California live scene from 1978 to 1983, and then disappeared in a flash with almost no footprint. Between 1983 and the rise of the internet the band was more or less forgotten by the public until, as is the case with many obscure acts from the 1980s, a recording of the group performing their breakout single “Janitor” on public access surfaced on Youtube in the early 2000s. It is a good thing, though, as the band’s sole album arguably deserves to be held alongside New Wave classics.

The video features frontwoman Su Tissue looking like an Amish girl abandoned in a punk squad, left to fend for herself. As she stood there, dead eyed, she looked like she was ready to burst into tears until the song’s snappy riff came cascading down and Tissue erupted into the unforgettable line, ‘I’m a janitor! Oh my genitals! I’m a janitor! Oh my genitals!’ And so, for the past decade or so, people have been wondering, just who is this strange creature and who are these weirdos going along with her? Finally, the 40th anniversary re-issue of the band’s self titled album, “Suburban Lawns,” answers that question and pulls the band a little further out of obscurity.

Even across a very brief 28 minute runtime, “Suburban Lawns” shows that this weird band managed to flirt with the alternative genres of the era without ever fully succumbing to any of them. A mix of various new wave post punk styles and maybe a hint of ska, as well as a strong, ironic Cold War sense of humor, the band were entirely their own thing, with only fellow L.A. band Wall of Voodoo seeming to be on a similar neurotic wavelength. The aforementioned ‘Janitor’ is a timeless punk classic and rivals pretty much any of the classic singles of groups like Violent Femmes. Su Tissue flips back and forth between a pinched, chipmunk voice and a sort of wailing primadonna. Meanwhile, the lyrics jam abstract concepts against each other without any one direct meaning, though hints of a deeply damaged psyche that is reduced to simply laughing and crying at the absurdity of suburban life seem to linger in the song. There is almost no better summation of the classic West Coast punk sound and attitude.

But, instead of fully devoting to the rumbling dangerhouse sound, the band cherry picked weird sounds from across the map. ‘Flying Saucer Safari,’ which seems to have arisen independently of the similar-ish Rezillos tune, is a straight-up New Wave radio bopper, with pop vocals draped over a jumpy, clean beat. Meanwhile, ‘Intellectual Rock’ revels in a low swinging, Stooges crash-and-bash while ‘Gossip’ is a trippy, psychedelic sermon that features melted vocals seamlessly weaved into and over the backing music.

No doubt, Su Tissue’s vocals are one of the main reasons this album sparks as bright as it does. At all times, she has this sickly-innocent outlook, with her squeaky voice, and seems to understand things entirely differently than everyone else. But for every time she plays coy, one wonders if the character that she inhibits knows that it’s all an elaborate trap and she’s just drawing you close with her childish eccentricity before she strikes. That’s not to mention ‘Gossip’ which finds Su Tissue, once again playing the outcast, but this time, tearing down her contemporaries in the vein of Carrie.

The other core component here is the raw power of the music itself. The compact take on Stooges self-destruction of ‘Intellectual Rock,” which makes the argument that cave-man music can be pretty evolved if you really think about, flows right into artsy song de-construction of ‘Protection.’ There is both an appreciation of the classic rock and punk format here, as well as a willingness to tear it apart and re-organize the pieces into something entirely new and different. It is a clever trick that helps the band avoid punk cliches of the era, but it also shows their core strength- they know how to write a really catchy song when they want to, they just do not always want to.

Futurismo has done an excellent job cleaning off this reissue. While the vinyl has yet to hit store shelves, the album is available for streaming. Even with the compression that inevitably comes with streaming services, the music is loud and punchy, but still has the broad, new wave sound essential to the release.

Who is to say why Suburban Lawns never really caught on or why they are not heralded in the annals of punk legends? Maybe they were just a little too weird or maybe they did not follow the “rules”  quite closely enough. It is a bittersweet token for the band, but the very traits which kept them from achieving canonization or easy categorization then now serve to exemplify just how special, weird, and puzzling they really were.

Their star burned hot, bright, and fast, but it most certainly burned. Any fan of classic punk owes it to themselves to listen to this strange, beautiful album.