“When They See Us” documentary a powerful look at racial injustice 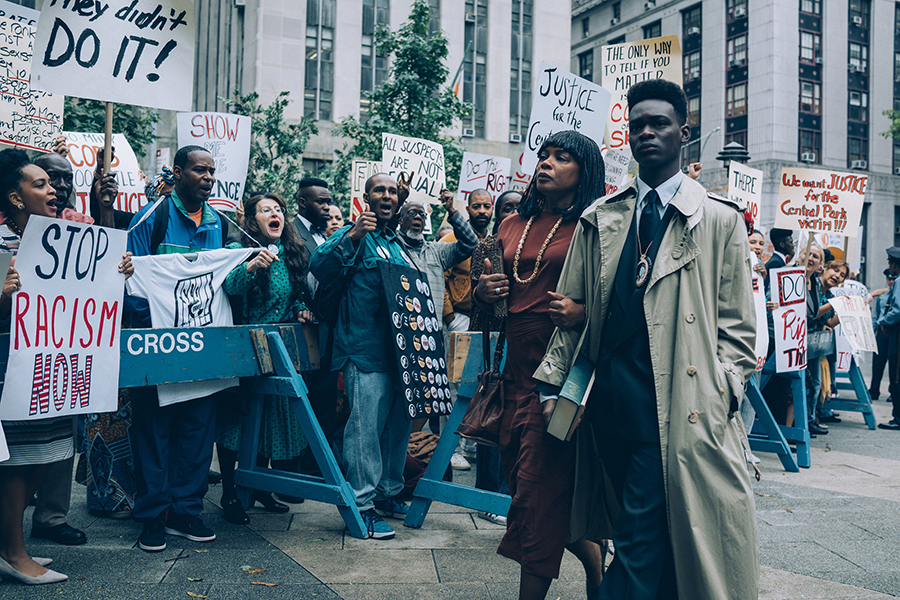 Yusef Salem, played by Ethan Herrise (right), walks past a noisy crowd in “When They See Us.”

“When They See Us” is a truly heart tugging, 4-part series that I think everyone should watch.

To give a light summary, a young white woman is brutally assaulted one night in Central Park. Five random, young black boys who are in the park on the same night are accused of the assault. None of them know each other but the police somehow connect them all to the assault.

Watching everything unravel is terrifying at first. One feels as if they are there and want to hide too.

It all starts with the boys ‘wildin’ in Central Park, as they say. The police arrive and arrest the multiple boys. Right away, the series depicts intense police brutality. The police tackle and beat the boys; they treat the boys as if they are not human. One of the boys, Kevin Richardson, sustains a terrible black eye from one of the policemen.

The accusations start with a big group of young black men but trickle down to what is now known as the “Central Park Five”: Kevin Richardson, Yusef Salaam, Antron McCray, Raymond Santana, and Korey Wise.

The first part of the series focuses on an hour-long interrogation of the five boys. The boys are between the ages of 14 and 16 years old with no parental or lawyer supervision.

The police force their authority over the boys, manipulate them to say what they want to hear, and physically assault them. A young person will say anything to get out of a bad situation, especially when they lack guidance.

Multiple times in the series you hear the boys cry out, “I just want to go home please.” It’s heart-breaking to watch them have to stick up for themselves while being completely belittled. The police don’t care if the boys truly committed the crime; they care about a verdict.

The police force a signed confession and confession tapes as a deal for them to go home. In that moment you start to think, “I would have done the same thing.”

I got chills when I watched the state representatives fill in any blanks to fit their narrative of the crime. They saw the boys as delinquents, not as normal teenagers.

The “When They See Us” series shows the trial that the boys faced and the trauma that each family endured because of the accusations made against their children.

You start to see things from a mother’s perspective and become protective of the boys.in the story.