Fantastic illustrations from the Korshak Collection 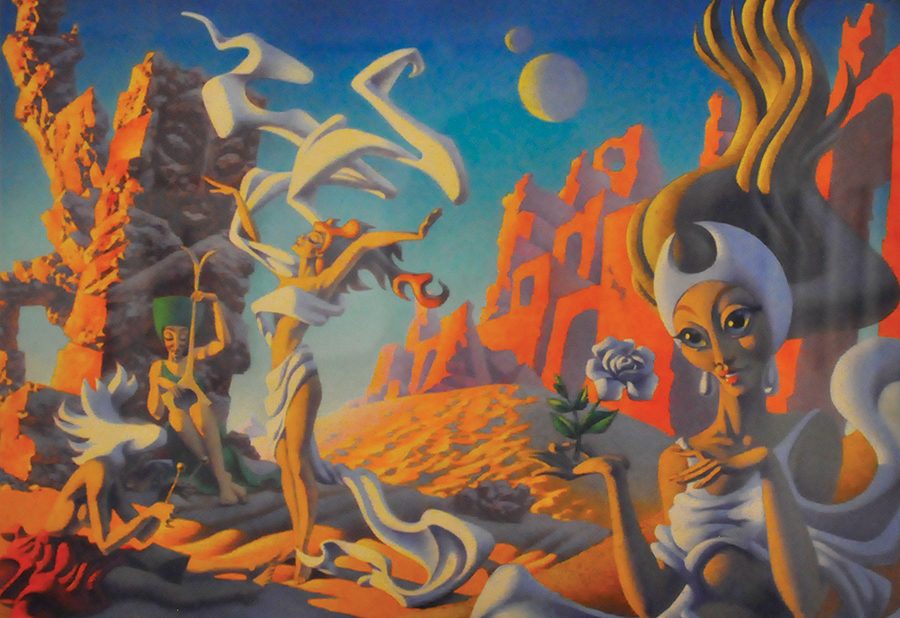 The Chazen Museum of Art is hosting contemporary artwork from the collection of Stephen Korshak, son of the science fiction publisher Erle Korshak from November 17 through February 4.

The Chazen’s collection consists of two distinct bodies: American and European. The American artwork, created in the 1940s, 50s, and 60s, hails from the pulp comic tradition (called such for the low quality, pulpy paper on which the comics were printed). Brilliantly colored images showed iteration after iteration of brawny male heroes, scantily clad, braving the terrors of alien planets.

Familiar themes emerged from the pages: white man, armed with technology, master of nature and beast alike, savior of buxom damsels in distress. Man, the godlike, lone pioneer in the face of a billion stars. The sentiments of a young, hungry country built on conquest, subjugation, exploration, and individual achievement manifest strongly in this collection.

Even as a woman who loves just about any sci-fi image I can get my hands on, I began to find the content and its repetition a little tiresome during my tour of the gallery. While exquisitely crafted, the magic of these pieces has faded with the covers they initially graced. They are aesthetically beautiful remnants of a disintegrating culture, and their historic value will remain undiminished. Most of the pieces are oil, acrylic, and gouache on illustration board, and were originally created as cover art for science fiction novels and magazines.

The European collection, all from the 1800s, is a much more subdued body of work. Bright colors are eschewed in favor of stunningly intricate pen and ink or watercolor works, from masters including Arthur Rackham, Edmund Dulac, and William Timlin.

Instead of imagining alien fortresses and stark lunar planes, the European artists delved into the wild and forgotten spaces of the world they already knew. Their works is full of twilit woods and hidden pools, of trolls peeking out from moss hung caves and fairies perched on the lacy upper branches of blossoming trees, wreathed in starlight.

There is an air of childlike wonder and delight in these pieces utterly different from the heavy handedness of the American collection. While both bodies fall into the fantasy purview, the two groups of work are as different as day and night, and are tastefully separated into two different rooms at the exhibits. Unlike the American art, most of the European works were created as stand-alone works, with the exception of a few scenes illustrated for collections of Grecian mythology.

Both groups of work convey echoes of the spirits of their homelands in their respective eras. The artisanship of both bodies is engrossingly well-done, and for anyone interested in fantasy and science fiction creations, the exhibit is well worth your while.