Madison-based ‘Chic’ wraps up production, takes to the air 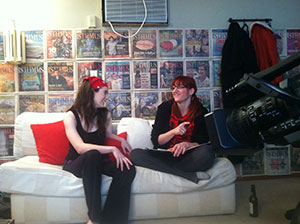 The web series “Chic” has finished production of its first season with its first episode already live. All of the actors, the music in the show and the places the scenes were shot are all local. Locals and frequent Madison-goers will spot several Madisonian things in the first episode.

Director and co-producer Chris Snapp wanted local film makers to be recognized. 4114 Production House, the production company of “Chic,” was founded with the idea of local film-making.

The series is about what it’s like to make an indie-film, and this film happens to be about sex with a plot. The first season centers around the pre-production process of film making and has six episodes. All of these episodes where shot completely in Madison.

“Chic” has already gotten a lot of good feedback, Towne and Snapp said. There are a lot of different aspects about the show that people can connect with.

“People can expect a really good story that uses a lot of different genres. Overall, it’s a drama with a lot of comedy in it,” Snapp said. It’s a story about how hard it is to make an independent film with a lot of characters that have different perspectives.

Harry Lance (Brandon Grinslade) works at a video rental store and has a thing for Gwen, but doesn’t know that she is an adult film star. The show starts out with the both of them talking at the counter in the store, when someone returns a certain DVD with her face on the cover.

While he has been in many areas of film production, this is Grinsdale’s first role in front of the camera. The relaxed atmosphere and the personalities of everyone involved made the production process a lot smoother than other projects he’s been on.
“It’s the most seamless production I’ve ever been a part of,” he said.

Many of the people involved in “Chic” are originally from out of state, but have moved to Madison in the last few years. They all say the same thing about the city being well-balanced with a blend of everything and beautiful. Grinsdale said it reminds him of a town in the Pacific Northwest around where he is from.

All of the episodes of the first season will premier this fall on film-local.com, the “Chic,” with the first episode already live. DVRs don’t have to be set to record because the episodes can be watched anytime once they’ve premiered and there are no commercials to interrupt viewing.

The world premiere of the second episode will take place at the Broom Street Theater on Sept. 29 at 7 pm. Admission is free.